It’s been a while since I have written. I haven’t felt like myself lately. The holidays this year have heightened my grief and anxiety. It’s not this intense every year. Thank God.

Tomorrow is Christian’s birthday. He would have been 11. The usual questions about what he would look like? Act like? Be asking for as birthday and Christmas gifts? continuously flood my brain and heart. I want him here. Sure he would be driving me crazy. He would be one more child fighting with his brothers. His attitude would probably be growing in size since he would officially be a middle schooler. I am guessing his hair would be a focus. He had the most beautiful head of hair. So many guesses. So much wondering. So many dreams turned to angel dust. In a matter of moments.

All of the wondering gets to be exhausting and overwhelming. The memories aren’t any less emotional but at least they don’t involve guessing. Christian was due on Christmas but was born on December 23rd. We brought him home Christmas Day. As first time parents my husband and I woke to find a beautiful baby boy being rolled in to the hospital room on Christmas morning. He was all snug and sleeping in an oversized stocking. It’s the same stocking that hangs on our mantle each year. The sight was so breathtaking and life changing. This little being would be coming home with us in just hours. 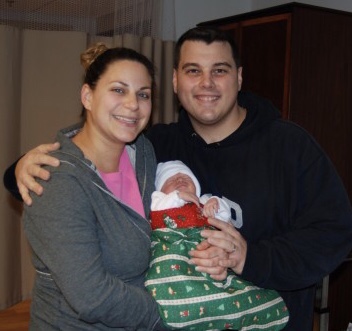 As we made our way home we passed our church. The priest had just finished Christmas mass and was outside. We asked him to bless Christian and he did. One would think a child who is blessed only moments after leaving the hospital would be destined for greatness and safety. The first yes and the second no; at least not in the way we were hoping. We could never conceive of what was to come in his life.

As Christian grew, we grew. Firstborn children teach their parents multiple lessons. Christian was not the best sleeper. He didn’t follow any of the examples of the types of babies they talked about in parenting books. The feeling of failing as a mom plagued me. These feelings not entirely unusual for a first time mom, but confusing nonetheless. One thing that was not confusing, even when I was sleep deprived, was how much I loved him. Again, as the firstborn, every little thing he did made my heart swell ten times. As much as I love my other boys it was different with them because it wasn’t my first time experiencing it.

As his personality developed his mischief did too. This was always a character trait I loved in little boys. As a mom to a mischievous boy it was still adorable but tried my patience!! Now I had to somehow figure out how to refine it without completely making it go away. This did not help my own issue of feeling like I was failing as a mom. When you have a child who does not conform to how others think he or she should behave it can be mortifying. Others make it known by looks, words and glances that your child is behaving poorly. There have been many times I witnessed this in a store and offered words of comfort to the parent instead of the opposite. As much as we love our children, it doesn’t ever feel great to be judged negatively by others.

Christian was not only mischievous but he was a biter! Oh yes he wanted to help me experience it all in his six short years of life. At a mommy and me class he bit a little boy on the back. The mother was not happy but seeing as this was her fourth child, I am sure she had encountered a similar situation before. Her dirty looks and unkind words said otherwise. We made it through. Christian eventually received Occupational Therapy during his preschool years. It definitely helped. Oddly enough I got a call from his therapist the second week she was supposed to see him. She had to cancel because she lost her son suddenly. Heartbreaking. Christian continued on with another wonderful therapist and they were able to make headway with some of his behaviors.

Christian’s larger than life personality was never able to be truly tamed. I wouldn’t have wanted it to be. There were times I wished he would tone it down just a little. He definitely did a lot of living in his short time on Earth. I always say he did everything 100%. All his mischief and love and passion and hugs and smiles and tantrums were at level 100! I’m not sure how we were chosen to be his parents. It’s something we are forever grateful for.

Tomorrow will mark his fifth birthday in heaven. No one should have to celebrate the day their child was born without their child here. We are not alone in this, unfortunately. Tuesday will mark his fifth Christmas in heaven. He is sure to be leading some giant celebration up there! His party in heaven will be mirrored in the smiles, joy and excitement on the faces of my children and nieces as they celebrate the magic of Christmas. It will help to buoy my mood but it will not take the pain away. The longing will remain for the best Christmas gift I ever received. Love to heaven…

My name is Cara Martinisi. I am mother to three boys and a wife to my high school sweetheart. Up until three and a half years ago, I lived a mainly charmed life. I married the first boy I fell in love with, had three easy pregnancies and three healthy boys. Family and friends were plentiful and amazing. There were bumps in the road, like with anyone else. For the most part, though, I had lived my life with everything falling neatly into place. This all changed after living 35 years in this manner. On July 3rd 2014, our house got struck by lightening. It was a scary experience, which resulted in a fire. Our entire family escaped the fire safely. Our home needed to be gutted and rebuilt, but we realized just how blessed we were to all be safe and sound. Fast forward exactly eight weeks later, to the end of the summer, August 28th. Our entire world was changed in a matter of minutes. We were living in a rental home, where a freak accident occurred. The supporting pole in the garage was not secure. It fell on my six year old son, Christian. My then three year old son and I witnessed the entire scene. This has irrevocably changed who I am as a person in every way. I am now a bereaved mother. It may be one of my titles, but not my identity. My family will never be the same. We are left to move on, while we are not whole. The trauma, shock and pain resonates daily, in one way or another. My mission, now, is to help others who have joined this undesirable club. My mission is to carry on my son’s message, which was kindness. My mission, now, is to make a new normal. I hope you get some inspiration from my posts, whether you are a bereaved parent or not. Grieving a child teaches you lessons that one can never learn in any other way. As always, love to heaven... View all posts by christiansredballoon

2 thoughts on “The Best Christmas Gift”